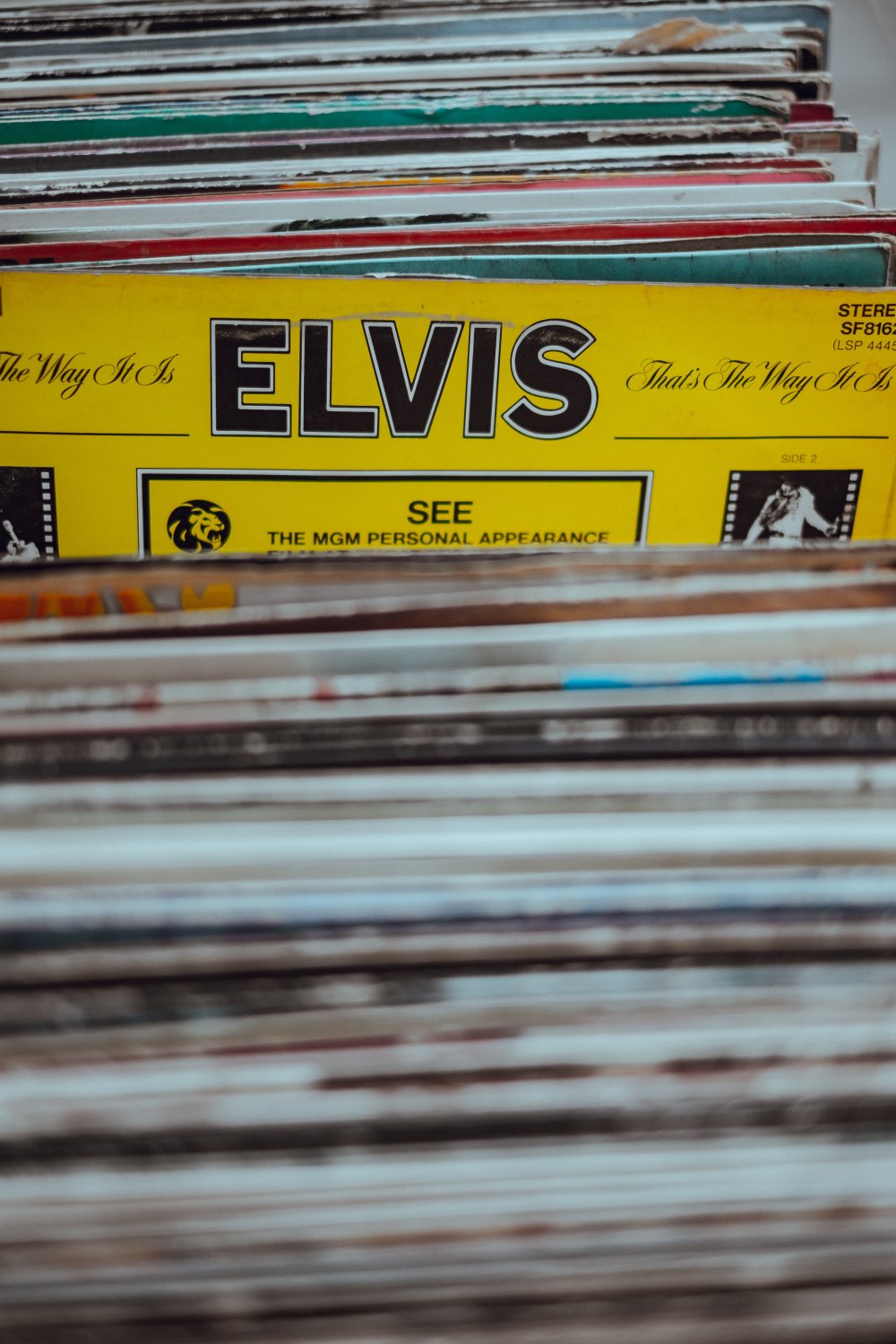 Michael is sitting on on a toilet in a black, white and gold bathroom. Mr Huang is dressed as 1950s Elvis. His hair is slicked back and he has a pair of sunglasses perched on his head. He has his trousers around his ankles and is hugging an urn to his chest. Michael has a London accent.

There is a knocking on the door. A voice with a Tennessee accent through the door (Vance).

V/O: Mr Huang. I’m sorry but the toilet… it’s not for… it’s not a public convenience. Those are available at the entrance of Graceland.

Michael: I will be out in a minute.

V/O: Mr Huang. I’m going to have to call security.

There is the muffled sound of a walkie talkie and a frantic conversation barely audible through the walls.

Michael: I can hear you, you know.

V/O: I’m sorry Mr Huang, but there is a group from Tokyo due through here any minute and they specifically requested-

Michael stands up, pulling his trousers up with his free hand.

Michael flushes. He walks to the sink and runs the water. He washes his hands, before splashing a bit of water on his face. He looks at his reflection in the mirror.

Michael [sings quietly]: Softly / I will leave you / Softly / For my heart would break / If you should / wake / And see me go –

Michael put his glasses down. He turns around and leans on the basin. He unscrews the urns lid slowly.

Afternoon on a bright sunny day.

A small group of people are standing outside the front of Graceland, Elvis’s last home. Among them in Michael, dressed as Elvis with his sunglasses on, clutching a plastic Tesco’s bag containing the urn. Maureen, a large middle-aged woman wearing an ‘Elvis Lives’ t-shirt and a bum bag is standing next to him vibrating with excitement.

Maureen: My, this is exciting. Isn’t this exciting?

Maureen: You a big fan?

Michael: My husband is.

Maureen: I love how supportive you folk are of your partners.

Michael looks at her but doesn’t say anything.

Maureen: Where is he?

Michael shift the bag with the urn in from one arm to the other.

Maureen: Probably gone to pee cos of the excitement.

Maureen: I was going to bring my momma but-

Michael: Oh. I’m so sorry for your loss.

Maureen: Oh bless you, she ain’t dead. She went on a Vegas trip with the gals from the whist drive.

Maureen: How she loves them slots.

Maureen: I’m Maureen by the way.

Maureen holds out her hand.

Vance enters in a pair of jeans, a plaid shirt and a cowboy hat with matching boots.

Vance: Well hello there music lovers, and welcome to Graceland Mansions, the home of the King, Elvis Presley, god rest his soul. I’m your guide for the day, Vance McCreedy, but you all can call me Vance, and if you care to follow me, we’ll start in the hall.

Vance leads the group off.

Maureen:  I think I’ve pee’d myself a bit. Your husband had the right idea.

Maureen runs off after the party.

Michael looks around and starts to pull out the urn.

Maureen runs back on.

Michael quickly covers up the urn.

Michael sighs, puts the urn back in the bag and follows slowly.

Back in the toilet.

Michael is kneeling on the floor, with the urn beside him, with the lid on the floor. He has laid out half a dozen pictures of him and another man, including a wedding photo. He is looking at them, picking up each one.

Michael [sings:] Oh my love, my darling / I’ve hungered for your touch / A long lonely time / And time goes by so slowly-

Michael [sings]: And time can do so much / Are you still mine-

The sounds of feet outside the door and voices talking low enough that we ca’t hear what is being said.

A bump and the door shakes as a body hits it. Michael continues to sing Unchained Melody.

Again, the door is struck from the outside.

A hallway. The group are milling around looking at the exhibits and photos on the wall. Vance is talking to a goth couple, who are wearing way to many clothes for the weather.

Michael is standing uncertainly in the centre of the hall. Maureen bounces up to him.

Maureen gives him a long look. Her eyes drift to the Tesco bag.

Maureen: I have dogs. Lots of dogs. Always. They just turn up at house and never leave. Then one day, this puppy wanders up, skinny little thing, shaking like a leaf, and like all the other dogs it stays. Only it’s sick. It would just climb up on to my lap and sit there shaking. But it was so cute. It’s amazing how quickly you fall in love isn’t it? I mean, it’s completely illogical but- Boom, something needs you enough and-

Maureen: Course it died, poor little thing. And I was floored. I mean, I grew up on a farm and I’ve had animals all my life, but that little scrap- finished me for months.

Michael: He was dying. When I met him. Renal cell carcinoma. Only neither of us knew.

Michael: By the time we did- know- it was too late.

Maureen puts her hand on Michael’s back and rubs his shoulder gently.

Maureen: He a big Elvis fan? Your husband?

Michael smiles for a moment before letting it slide from his face.

Maureen: I’m gonna faint. From the heat. I mean, it’s a very warm day. Wouldn’t surprise me if some of the group wandered off in all the excitement.

Suddenly Maureen lets out a loud groan as she falls to the floor dramatically. Vance and a the goth couple turn to look, and seeing her on the floor run over.

Maureen is making a lot of groaning sounds.

Michael looks around. Realising no one is looking at him, he walks down the hallway and exits through a door.

Back in the toilet.

Someone hits the door again from the outside.

Michael stands up from where he is kneeling. He picks up the urn. He walks to the toilet. Kisses the urn.

Michael [sings]: After all the years / I can’t bare the tears / To fall-

Michael pours that ashes into the toilet.

Michael [sings]: So softly, so softly / I will leave you / I will leave you there.The door bursts open just as the last of the ashes land in the toilet bowl with a splash. Vance and a security guard fall into the bathroom. Michael reaches toilet handle and flushes.

Vance: Did you just-

Security guard: Another one? That’s the third time this week. What is it about you’re groups, Vance?

Michael bends down and collects the photos. He wraps them carefully in the Tesco bag from his pocket.

Michael: Husband. This was supposed to be our honeymoon.

Vance: My condolences. But we’re still gonna have to cuff you, you know?

Vance: Was it worth it?

The security guard pushes Michael out of the door.

Vance moves to the toilet, looking down into the bowl.